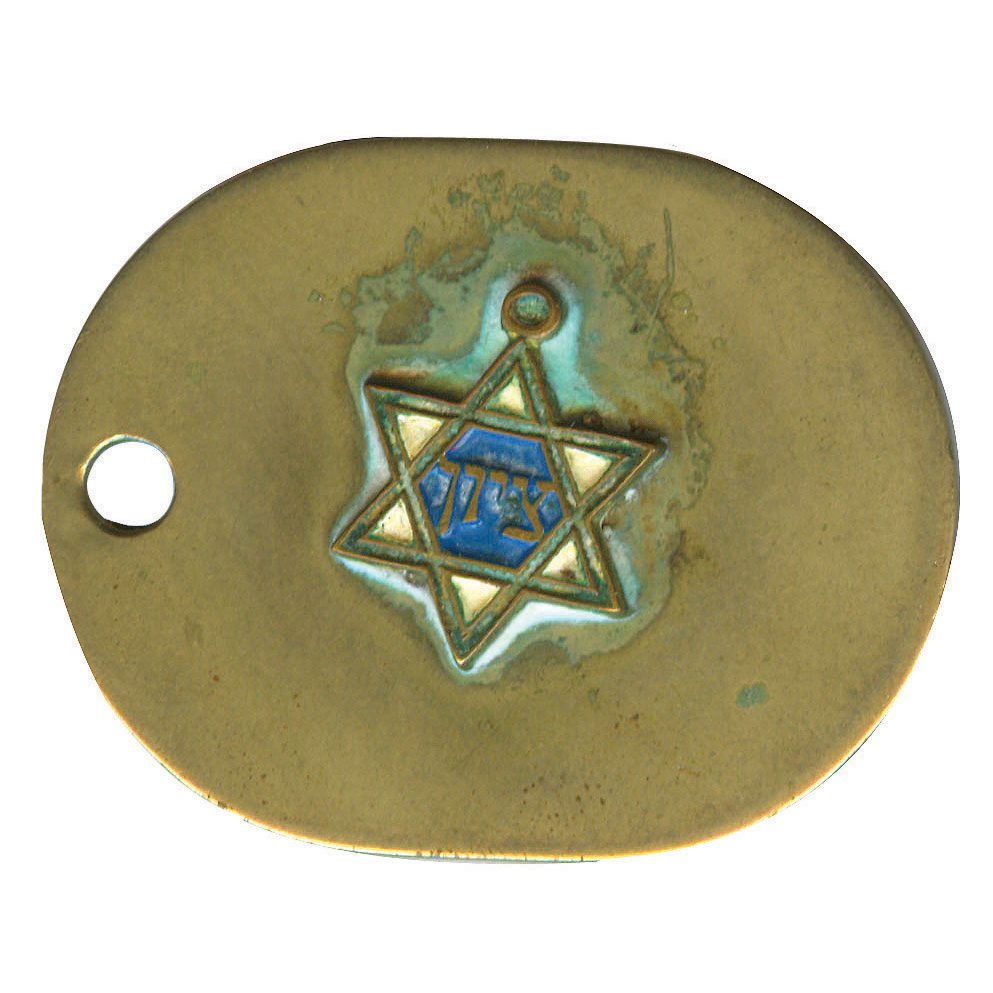 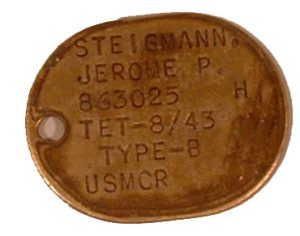 The “H” on the front of PFC Jerome Steigmann’s Marine Corps dog tags labeled him as a Jew. The Magen David with the Hebrew word “Zion” on the back identified him as a Zionist.  The star was designed as a pendant for a chain, but Steigmann affixed it to the back of his dog tag to make a statement about his belief in the need for a Jewish homeland. Steigmann wasn’t alone in carrying a Zionist emblem.  There are several dog tags with similar fixtures in the collection of the National Museum of American Jewish Military History. For many Jewish servicemen, both secular and religious, Zionism represented an important part of their Jewish identity and wearing it on your ID tags just made sense. 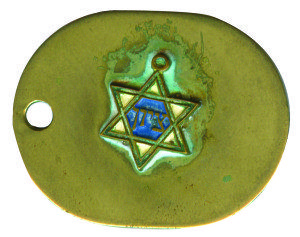 Back of Dog Tags – Zion

The realization of the state of Israel was about five years away when Steigmann was issued this dog tag. The British White Paper policy was still in effect, limiting Jewish immigration to Palestine.  For many American Jews, knowledge of Nazi atrocities was growing as the war progressed and the Zionist cause became linked to the war effort. Many Jewish Americans had enlisted specifically to fight for the cause of European Jews whose situation didn’t allow them to fight the Nazis for themselves.

For Steigmann, while  fighting the Japanese in the Pacific, the star and the Hebrew characters may have reminded him of the European effort and the importance of the cause there. For the Zionist, creating a Jewish homeland was the logical solution to the problems in Europe.  Countless American soldiers who went to Europe without commitment to the cause of a Jewish homeland became devoted to Zionism after seeing the condition of European Jewry in the wake of the Holocaust.

Zionism also linked Jews in the American military with Jews throughout the world in a common cause. Military service provided the first exposure for many servicemen to the world and the Zionist cause. It reinforced Jewish identity and earned its place on the identifier issued by the military.  A Marine, a Jew, and a Zionist: it can all be seen on the dog tag of PFC Jerome Steigmann.