American Passovers in Europe in the First World War 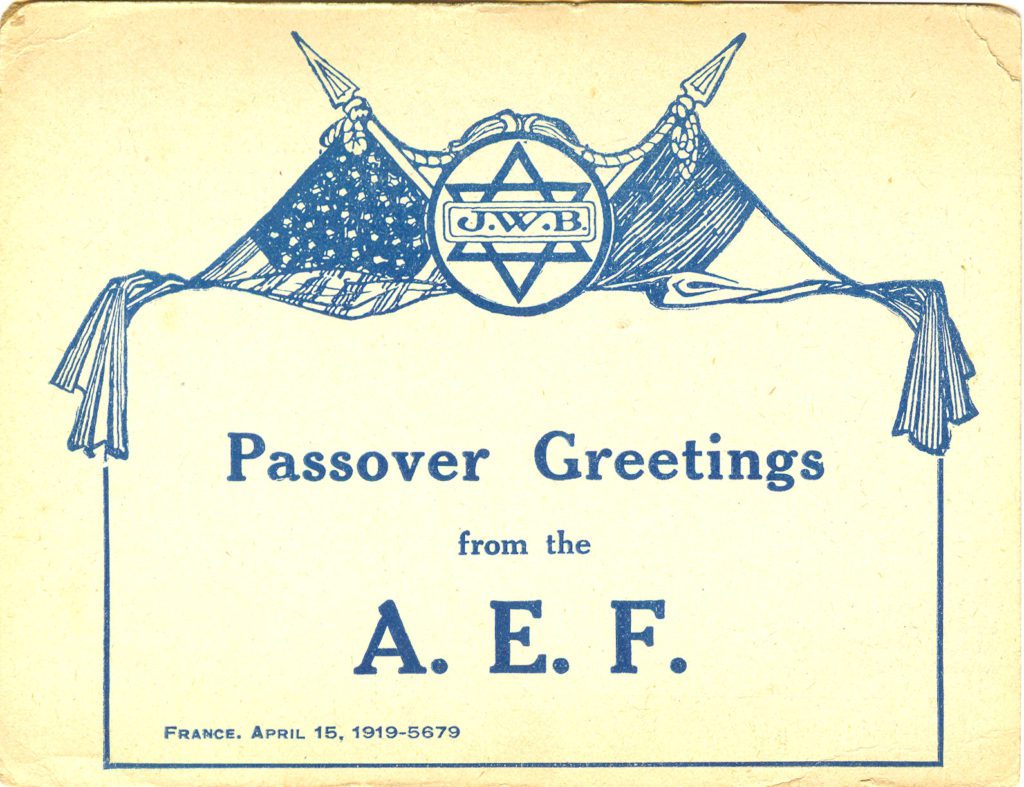 The U.S. entered WWI on April 6, 1917. That night was Erev Pesach. If there were any Passover observances in the tiny American military that day, they would have been small personal affairs. Later that week, the Jewish Welfare Board (initially called the Jewish Board for Welfare Work) was founded to  to help manage Jewish affairs in the military.

A year later, the Army and Navy had grown tremendously. American men were in Europe fighting in the trenches. Over 200,000 American Jews served in the First World War. By April 1918, many of them were overseas fighting. The Jewish Welfare Board had become a functioning organization for those on the home front, but had virtually no presence in Europe.

Passover services for Americans in Europe in 1918 were makeshift affairs. Some men were excused from duty to observe the holiday, but little was available in terms of supplies or leadership. The only official Jewish chaplain overseas was Rabbi Elkan Voorsanger of the 77th Division. Of course, the most difficult factor in allowing men to celebrate Passover was combat conditions.

One Passover Seder was led by Colonel Max Wainer. Later in the war, Wainer would become a chief worker of the Jewish Welfare Board. In 1918, he worked on his own and organized a Passover seder for his own unit at Tours, France where many Americans were stationed. Even without resources provided, they found a way to celebrate the holiday with help from wherever they could find it. Other American Jews did the same. 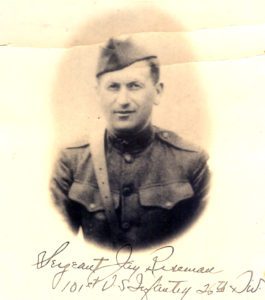 published by the Boston Herald:

After leaving our trenches we had a four days’ hike, covering, I should say, over 50 miles, and landed at —–, which we thought was our resting camp. All were overjoyed over the thought of getting a furlough. But what a surprise! After a three days’ rest, working harder than at the trenches, we were transported by auto to another front.

While at our three day’s rest camp provisions were made for Lt. [Bernard I.] Gorfinkle. An order was immediately sent around and all the Jewish boys were notified to attend. Our Passover service was held in a schoolhouse of a little French village. The young school teacher was kind and offered us anything we desired. At about 8:30 pm our services commenced. Each once was given a prayer shawl to wear and presented with a prayerbook in Hebrew and English by our worthy lieutenant. Wine was had, but what we missed was the unleavened bread, which was substituted by our hard tack: a poor substitute, but it served the purpose.”

Rabbi Elkan Voorsanger had enlisted in the Army as a private in May 1917. He was trained as a medic and did volunteer work as an acting chaplain. On October 1917, he was commissioned and began work as an official chaplain. He was the first Jewish chaplain to serve overseas. He later described a 1918 seder where the supplies came from the YMCA, the prayer books from the British. The need to scrape everything together in the midst of a war seems to have motivated Voorsanger:

It was the most tremendously inspiring service that I have ever conducted. Nearly three-hundred Jewish men came in from all parts of this sector to celebrate the Passover – Orthodox and Reform all joining in the common service which I read. I had the little book issued by the British for the Jewish sailors and soldiers. A real spirit of devotion filled the Y.M.C.A. hut, in which the services were held. The boys really felt their Jewishness on this occasion and I could feel a thrill of pride as I looked at them. I preached what I think (be it said modestly) the best and one of the real sermons of my life… They were proud of their heritage of Judaism and Americanism and many told me that a feeling of loyalty to this double heritage was growing more and more with their stay in France. It was a great privilege for me to be in a position to officiate at the first official service held for the Jews of American Expeditionary Forces… We strangers in a strange land are eating our matzos in the same spirit our ancestors are them: for the cause of liberty and democracy.”

By Passover of 1919, the war was won. Jewish service members had acquitted themselves well in the war effort. The Jewish Welfare Board had become a large organization capable of assisting over 200,000 Jewish soldiers and sailors. They had workers stationed overseas. There were now more Jewish chaplains who were organizing well-supplied Seders. Massive efforts were put into Passover seders for the Jewish men and women stationed in Europe. Services were conducted throughout France and Germany. A general order for furloughs was granted for the holiday:

Where it will not interfere with the public service, members of the Jewish faith serving with the American Expeditionary Forces will be excused from all duty from noon, April 14th, to midnight, April 16th, 1919, and, where deemed practicable, granted passes to enable them to observe the Passover in their customary manner. 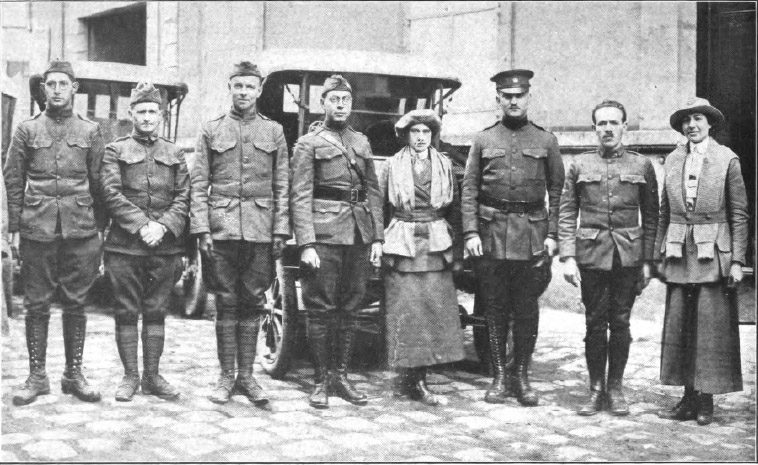 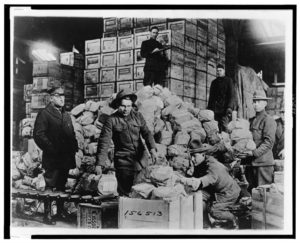 Passover seders for the men and women overseas were a world apart from what they had been in 1918. The Quartemaster Corps, working with the Jewish Welfare Board, supplied abundant materials for seders, recreational activities and other ways for Jewish soldiers to celebrate. Jewish Welfare Board-produced prayer books for soldier and sailors were distributed specifically for Passover. The armistice was four months passed and celebrating in peace time made it more than a respite from fighting. 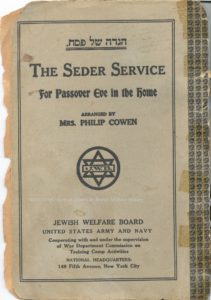 in 1919, the Jewish Welfare Board sponsored a magnificent seder. It was held in Coblenz, Germany, in a large hall once used by Kaiser Wilhelm II for some of his festivals.”

Max Goldstone described his 1919 Passover in a letter home to a cousin:

“Last Monday being Passover, all Jewish men in the AEF got a three-day pass to celebrate this holiday. I got my pass and went to Toul, where the Jewish Welfare Board entertained us royally. First we went to a synagogue to hold services then we had a small ‘Sader’ eating Matzahs and many relishing dishes. I also slept in a real feather bed, and had the real freedom of a civilian. Altogether, over 600 Jewish boys were there all from the seventh division and most of them from dear Chicago.”

Chaplain Lee Levinger described leading Passover seder and events in Le Mans as “the great event of my service”:

The Jewish Welfare Board and I labored to arrange a full celebration for the thousand Jewish soldiers who came in from four different divisions. Quarters were provided in the Classification Camp for all the men who did not have the money or the previous arrangements for hotel rooms, as well as full accommodations for the Passover feast, the Seder. The Jewish Welfare Board obtained full supplies of Matzoth, unleavened bread, as well as Haggadoth, or special prayer books for the Seder…

The spirit was as strong a contrast as possible to that of my other great service at the fall holydays… One of the most touching features of the Seder was the large number of requests that I should inquire whether Sergeant Levi or Private Isaacs was present. Then how the whole gathering would be electrified when a voice cried out, “Here,” and cousins or comrades who had not known even of each other’s safety were able to exchange festal greetings and rejoice together.

For the two and a half days’ leave the Jewish Welfare Board and I tried to keep the men busy,
with something for every taste. The full program included a Seder, four services, a literary program, a vaudeville show, a boxing exhibition, two dances and a movie. All were well patronized, for the soldier had a cultivated taste in diversion, especially after the armistice. But certainly the most popular of all was the Seder. The soup with matzah balls, the fish, in fact the entire menu made them think of home.”

French Rabbi Schumacher, leader of the local synagogue in Dijon, France, had helped American soldiers throughout the war. In 1919, assisted by the Jewish Welfare Board, he led a large service and Seder. 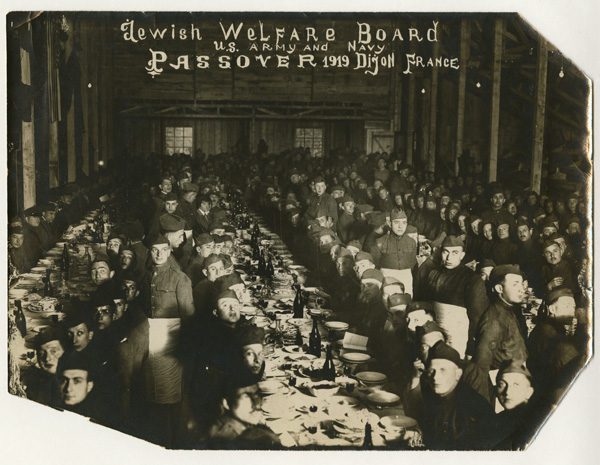 While Levinger was leading the Seder in Le Mans, Paris hosted what he called the “most striking of all:”

The great Seder at Paris, with its crowd of American, Australian, English, French and Italian soldiers, some of them former prisoners in Germany, all of them united in the great occasion of their faith. Among the speakers and the guests of honor were some of the great leaders of Jewry, as well as personal representatives of Marshall Foch and General Pershing. Colonel Harry Cutler, Mr. Louis Marshall, Judge Julian Mack, Dr. Cyrus Adler, and Dr. Chaim Weitzmann were there, as well as many other celebrities. At that time and in that place the highest honor for any man was to worship and eat side by side with the soldiers, who had carried love of their country and loyalty to their faith to the last extreme of service and of sacrifice.” 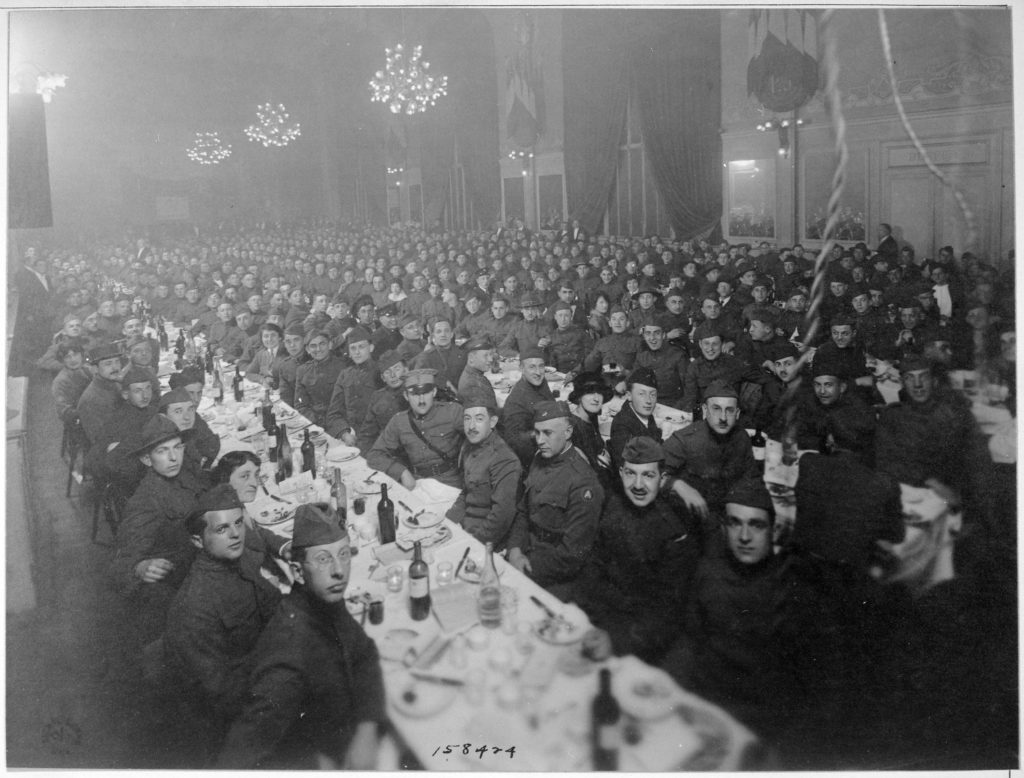 The “First Passover Sedar Dinner” given by Jewish Welfare Board to men of Jewish Faith in the American Expeditionary Forces in order that they may observe the Passover Holidays. Paris, France. Courtesy of National Archives.

Just as the U.S. military grew into a large and modern force during World War I, so did the service provided for the welfare of over 200,000 Jewish soldiers and sailors. As in all wars, these Jewish fighters saw a tremendous diversity of experience in the military. The way they could experience Passover was just one small example of the growth modernization of the U.S. military. From the non-existent in 1917 to the meaningful, but makeshift Seders in the field to 1918 to the elaborate and well-supplied events of 1919, the mechanism for ensuring the morale of the Jewish service members had grown into it’s modern form. The necessity for this testifies to the importance of Jewish Americans to the overall fighting force of the United States.