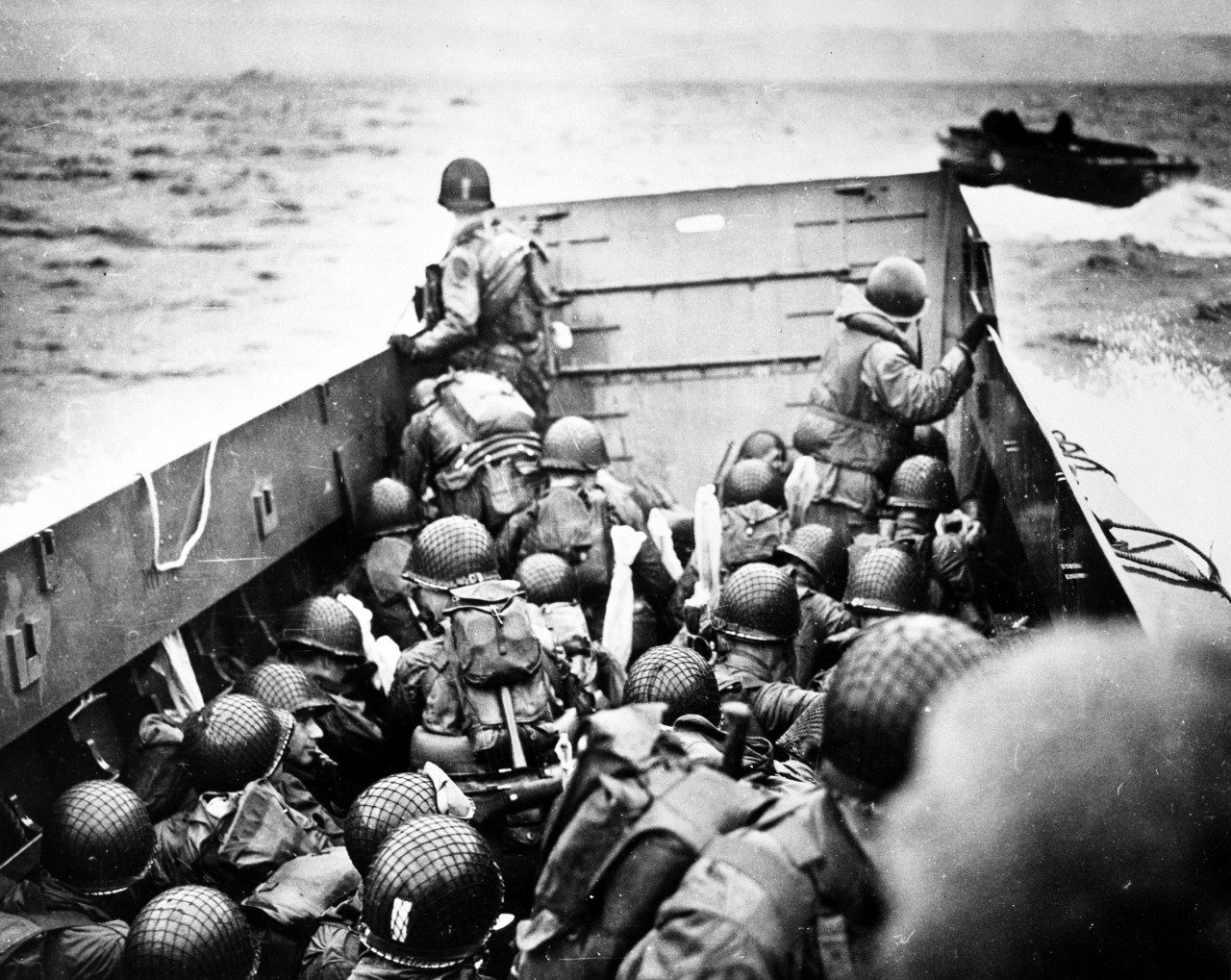 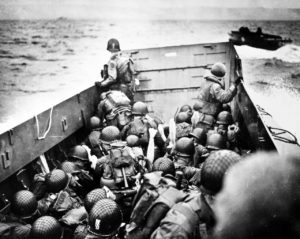 Troops crouch inside a LCVP landing craft, just before landing on Omaha Beach on D-Day, 6 June 1944. Photograph from the U.S. Coast Guard Collection in the U.S. National Archives.

Even before the first men had come ashore for the Allied assault on Normandy on June 6th, 1944, Lieutenant Robert Halperin of the U.S. Navy had been at work on the beaches. Halperin was attached to Assault Force “U.” His job was to mark the landing sites for the assault infantry. Halperin successfully helped the boats avoid both allied bombing and enemy attack. He guided the first two boat waves from the transport area to the beaches where they were able to move inland.

War correspondent William H. Stoneman described Halperin’s work: “… an intricate job calling for as much brain as courage and barrels of both…. He is certainly making a hero of himself again this morning (D-Day) doing a job on which the success of our assault depends and which not one man in a thousand would like to have.”

The citation for the bronze star he received describes more of the heroism: “Under the direction of Lieutenant Halperin, troops were rescued from swamped boats and dispatched to the beaches, and two men were saved from drowning by his exceptional initiative and quick action.”

Halperin was already highly decorated before D-Day. He was one of the first ten men selected for the Navy’s special amphibious Scouts and Raiders. Like many of the Scouts and Raiders, Halperin was an athlete. He’d played football at Notre Dame, University of Wisconsin and professionally for the Brooklyn Dodgers. He saw his first military action in November 1942 in North Africa. There, he earned the Navy Cross, the Navy’s second highest honor. The actions near Port Lyautey, Morocco were quite similar to what he would do at Normandy a year and a half later. The Navy Cross citation:

For extraordinary heroism and devotion to duty while in charge of a Scout Boat from the Northern Attack Group during the assault on and occupation of French Morocco from 8 to 11 November 1942. Preceding the assault on Mehdia on 8 November, Chief Specialist Halperin skillfully maneuvered his boat in complete darkness from the transport area seven miles off the coast into a position to locate and mark landing beaches on the hostile shore. Landing an Army scout party at the prescribed beach, he then, at great risk of his life and despite the strafing of enemy planes, steadfastly maintained a position off shore and guided incoming waves of assault troops to their proper destination. When all had landed, he assisted the shore party in locating points of egress from the beach and connecting roads inland, and personally captured two enemy officers. His conduct throughout was in keeping with the highest traditions of the Navy of the United States.

In 1945, he earned a Silver Star for his work in China with the Navy training guerrilla fighters to oppose the Japanese. After the war, Halpern was successful in business and competitive sailing. He was an Olympic medalist for the U.S. in the 1960 games in Italy.