Over There: Abie Fox

In The Belly of the Beast

The United States Navy commissioned the USS Texas on March 12, 1914.  A New York Class battleship she contained the last coal-driven propulsion system used in this type of ship.   Her fourteen coal fired boilers propelled her to 21 knots at full speed.  Some of vessel’s multiple five inch and fourteen inch cannons thrust a more than one ton shell thirteen miles.  Before World War I the Texas became the first ship to mount antiaircraft guns and develop a capability to launch aircraft. 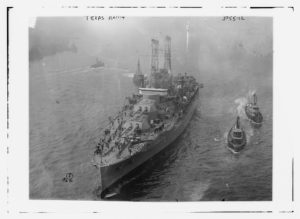 Abie Fox, a Polish émigré and Fort Worth, Texas, coffee shop owner, entered the U.S. Navy in April 1917 and he immediately shipped out for training at the Great Lakes Naval Air Station.  He eventually joined the USS Texas as a Fireman Second Class on June 28, 1917.  He looked forward with much anticipation to action as part of the 9th Battle Squadron operating out of Scotland.  However, a funny thing happened before he ever got there. Trying to avoid a minefield off the coast of Rhode Island at the mouth of Long Island Sound, the Texas ran aground on Brock Island.  She could not maneuver off until towed to open water by tugboats.  Suffering extensive damage and needing repair, the ship did not get into the fight until January 1918.

The life of a fireman in the belly of a battleship in World War I could at best be described as difficult and at worst as horrible.  A coal barge anchored next to the ship. Large cranes lifted the fuel onto the Texas’ deck. Then Abie and much of the rest of the crew shoveled coal down large chutes that led to coal bins in the engine room. As a Fireman 2nd Class, Abie Fox transferred large black chunks from the bins onto floor plates where it passed to others of similar rank who placed the fuel into the boilers. He along with his comrades sweated profusely from the searing heat, inhaled unhealthy coal dust and thick smoke that led to occasional shortness of breath. One of his crewmates stated that his skin turned so dark after his shifts in the engineering/fuel room that he hardly recognized himself in the restroom mirror at the end of a shift.

Another fellow sailor, Charles Hergut, said, “Hell can’t be any worse than firing these boilers.”

When the vessel ran at slow speed and the boilers dimmed somewhat, Abie and his shipmates often got meat, onions and potatoes from the galley, placed them in a coal scoop and cooked a stew in one of the fire-boxes. Only by the grace of God did most of them not get black lung disease, pulmonary or stomach cancer.

When the Texas arrived on February 11, 1918, at the Scapa Flow in the Orkney Islands off the coast of Scotland, she was assigned to Battle Division 9 of the 6th Battle Squadron of the British Grand Fleet. Abie and his crewmates in the boiler room kept the fires burning and the screws turning as they helped the great ship move forward into the North Atlantic escorting Allied convoys in the vicinity of Norway.

Only once did the German battle fleet venture out of its estuary on the Jade and Emms Rivers to challenge the Allied shipping. However, after seeing the Texas and other large ships, they retreated beyond gun range and a major encounter never occurred.

On November 21 together with the English Grand Fleet, Abie’s ship met the German Navy forty miles east of the Isle of May and escorted the enemy to the Firth of Forth, Scotland, where surrender and impoundment of the Boche vessels occurred.  She got under way again December 12, when together with other vessels of Battle Division Nine she escorted the USS George Washington carrying President Woodrow Wilson to Brest, France on his way to the Paris Peace Conference. Two days later the ship embarked for home and arrived in New York just in time for the holiday season.  Fireman 2nd Class Abie Fox finished his service to America two months later and left his battleship to return to civilian life.

Note: A version of this article appears in Dr. Julian Haber’s book The Yanks Are Coming Over There, Over There. The book is a joint project of JWV Post 755 and Fort Worth Jewish Archives.  Funding provided by grants from the Dan Danciger JCC  Hebrew Day School Supporting foundation and Tarrant County Jewish Federation.

Revised versions of They Were Soldiers in Peace and War Vol. I and Vol. II tell the stories of more than one hundred Jewish American Service men and women, WWI through our current conflicts and was published in 2015.  They are available in our museum store.