Over There: Frank Abramson

A Hero at Home

In January, 1918, Corporal Frank Abramson, U.S. Marine Corps, saw Navy Yeoman J.C. Mullaney fall from his ship into the freezing cold waters of the New York Bay off the 35th Street Pier in Brooklyn. Fully clothed in his winter Marine Corps uniform, Abramson leaped in after him. Abramson saved Mullaney’s life. But it came at a high cost. After being submerged in the water, Abramson was paralyzed and Mullaney also suffered spine damage. His heroism was recognized by New York City Mayor John Hylan who presented Abramson with a United States Volunteer Life Saving Corps Medal.

He also received a Congressional Silver Medal awarded by the Secretary of the Treasury with a description of his heroism:

Jan. 3, 1918, at the foot of Thirty-fifth Street. Brooklyn, N. Y., rescued Yeoman (third class) J. C. Mullaney, who had fallen over board from the U. S. S. Rappahannock. To effect the rescue Abramson jumped onto a floating ice cake, pulled Mullaney up beside him, and tied a rope around his body. Both men were then hauled to safety. It is shown that the weight of the two men on the ice sub merged it, threatening to leave Abramson in the icy water with his charge. 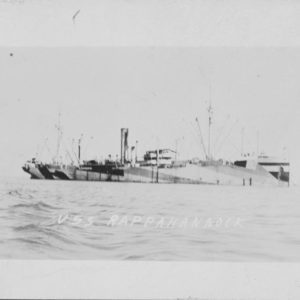 Abramson was already an experienced veteran who had served around the world before he enlisted in the Marine Corps for World War I. He’d served three years in the Army from 1908 to 1911 including time in Mindanao, Philippines. He enlisted again only months after his discharge in 1911, serving with Co. H, 16th Infantry. He was sent to the regiment’s headquarters at Fort Seward, Alaska. Abramson’s first encounter with icy waters came when he was sent to the Presidio via Nome, Alaska in 1912. He was caught in an ice floe, causing a 90 mile trip to take 7 days.

When he re-entered the service in 1918, the Abramson was back close to home with Marines stationed at Brooklyn Navy Yard. He was born in London, England to Russian parents who came to the U.S. when he was two years old. He grew up in Brooklyn.

Abramson expressed regret that he “never got a chance to get to the other side.” But his heroism at home was well recognized. He was honored by the Veterans of Foreign Wars and benevolent and life-saving associations at home. A letter from Mullaney also offered congratulations and thanks: “Allow me to extend to you my heartiest congratulations and sincerest thanks to you for what you did for me, and were so well awarded, my only request (sic) is that I am not in a position to reward you something myself.” Abramson’s story was printed in the Jewish press as well including papers across the country like the Chicago Sentinel and St. Louis Modern View.