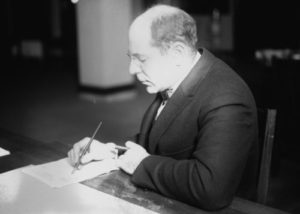 Considered a World War I hero by many, Captain Elkan Voorsanger became known as “The Fighting Rabbi” during his time in the military. Born in San Francisco, Voorsanger was ordained as a Reform Rabbi in 1914 from Hebrew Union College. He accepted a rabbinical position at a congregation in St. Louis, but when the United States entered WWI, he immediately enlisted. The book The Fighting Rabbis: Jewish Military Chaplains and American History includes a letter from Voorsanger upon his decision to enlist. “I am entering this war to register my protest against the war,” he wrote. “I can do that in no better way than to go to the front to alleviate the suffering of those who know not why they go.”

Voorsanger was initially trained as a medic, but when the United States government allocated additional positions for chaplains, Voorsanger became a chaplain and was promoted to the rank of first lieutenant with his change in position. He worked his way up to Captain, and was among the first group of American soldiers to arrive in France in May 1917.

Chaplain Voorsanger was eventually assigned as the senior chaplain to the 77th division, consisting of soldiers from all different nationalities and religions. He served both Jewish and non-Jewish soldiers, offering counsel and support to all who needed it, especially the wounded and dying. Voorsanger would also travel throughout the region to organize and provide services for Jewish soldiers. He was able to organize Yom Kippur services in 1917 for soldiers at the front lines, as well as lead Passover services in the American Expeditionary Force in 1918. His travel was made possible through his relationship with the Jewish Welfare Board as a soldier-recipient, as they supplied him with an automobile, money, and various supplies so he could visit and help as many Jewish soldiers overseas as possible.

His nickname “The Fighting Rabbi” came from his enthusiasm for joining his soldiers and troops on the front lines, wanting to be there to administer aid and help whenever necessary. If his men were fighting at the front, and stuck in trenches, Chaplain Voorsanger was right there with them. During the Argonne battle in France in 1918, Voorsanger was himself injured by enemy fire while on the front lines aiding soldiers. For his actions he received the Purple Heart and French Croix de Guerre.

Voorsanger stayed overseas as a chaplain until his resignation from the military in 1919. He continued working overseas with the Jewish Welfare Board as both overseas director, and later as chaplaincy commissioner during World War II. During the mid-twentieth century he served as executive director of the Milwaukee Jewish Welfare Fund (Milwaukee Jewish Federation at the time), until he retired and returned to his hometown of San Francisco.

Elkan Voorsanger passed away in California on May 1, 1963.