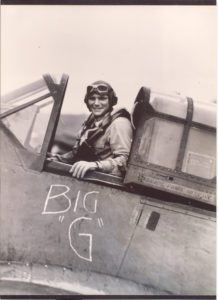 Gerald Fink in a fighter plane. Taken while he was a Captain during WWII. (Source: NMAJMH)

Major Gerald Fink was a Marine fighter pilot in WWII. He served again in 1951 during the Korean War. While flying a mission, his plane was shot down over Wonsan Harbor, and he was captured. Fink was a Prisoner of War from 1951 to 1953. He was physically and mentally tortured during this time, and held in horrible conditions such as frequent solitary confinement. Fink did find something that he enjoyed to keep himself busy though: woodworking. He made his own tools in the prison camp, and created items such as baseball bats and a prosthetic leg.

Also in the camp was a U.S. Army Chaplain, Father Emil Kapaun. Many prisoners said that Father Kapaun was a true source of positivity and compassion. Major Fink arrived at the camp a few weeks after Father Kapaun passed away, so the two men never met. Even so, after hearing many stories about the chaplain, Fink decided to make something as a tribute to him. Using glass, a knife, part of a drain pipe, and a mallet, Major Fink constructed a wooden crucifix to honor Father Kapaun. It was almost 3-feet tall, and took him almost 3 months to complete.

The crucifix left the camp with the American prisoners when they were released. After his own release from the camp, Major Fink receive the Prisoner of War medal in 1954. Though the circumstances for its creation may have been atypical, he was proud of his creation his entire life. Gerald Fink died in 1987, but will forever be remembered as the Jewish officer who made a crucifix for a Catholic chaplain.