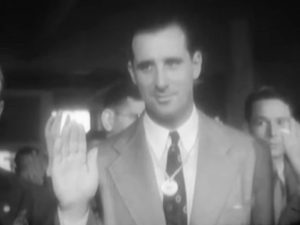 Hank Greenberg taking his oath and being sworn into the U.S. Army. (Source: U.S. Department of Defense)

Hank Greenberg may be most well-known for his baseball career, but he also made history through his faith and military career.

Greenberg was born on January 1, 1911 to an Orthodox family that spoke both English and Yiddish at home. His love of baseball started early in life, and turned into a career for him as he played professionally from 1930 to 1947. His faith would often influence, or unfortunately interfere, with his career.

When Greenberg was playing for the Detroit Tigers in 1938, he was 2 homeruns shy of breaking Babe Ruth’s season record. He was never able to accomplish this though; according to Greenberg in his autobiography, Hank Greenberg: The Story of My Life, the other teams “didn’t pitch to him, because Greenberg was a Jew.” Though he did not openly advertise his faith, Greenberg was not shy about being Jewish either. He chose not to play in an important 1934 game because it took place on Yom Kippur, and proved to be an inspiration and role model for Jewish baseball fans across the country.

In May 1941, Greenberg was the first major league baseball drafted and called-up for WWII service. He served with the Army for 3 months, and returned to Detroit to prepare for the 1942 season. When the attack on Pearl Harbor happened though, Hank Greenberg immediately changed his mind, and publicly announced that he was re-enlisting in the military, another first for major league baseball. At the press conference announcing this decision, Greenberg stated without hesitation, “I’m going back in. We are in trouble and there is only one thing left to do – return to service. I have not been called back, I am going back of my own accord.”

Greenberg enlisted with the Army Air Corps this time as an Infantry Sergeant, and was later commissioned as a Second Lieutenant. He was deployed to China in 1943, returned back stateside in 1944, and was discharged in 1945. In total, Greenberg’s military career lasted about 50 months, at the height of his baseball career.

Greenberg returned to professional baseball until he retired in 1947. Before his death in 1986, Greenberg said in an interview, “It’s a strange thing. When I was playing, I used to resent being singled out as a Jewish ballplayer, period. I’m not sure why or when I changed, because I’m still not a particularly religious person. Lately though, I find myself wanting to be remembered not only as a great ballplayer, but even more as a great Jewish ballplayer.”

While Hank Greenberg may be remembered for his baseball career more than his military contributions, there is no question about the pride that he held for his faith and his country. In The Story of My Life Greenberg wrote, “I realize now, more than I used to, how important a part I played in the lives of a generation of Jewish kids who grew up in the thirties. I guess I was kind of a role model.”