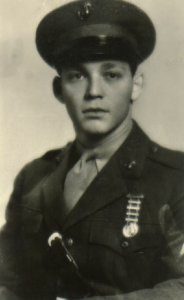 A Dallas, Texas native, Jack Miller was born on April 2, 1920. Three weeks before graduating college, he enlisted in the United States Marine Corps. He reported for duty six weeks later, and commissioned as a Second Lieutenant.

In 1941, Lieutenant Miller went to the Pacific Ocean theater with “Carlson’s Raiders.” this was a handpicked team of Marine Corps officers led by Lieutenant Colonel Evans F. Carlson. They specialized in guerrilla warfare. Many of them came from southern states, and The New York times referred to them as “The Roughest and Toughest.” They often surprised the enemy with quick, devastating blows.” Lieutenant Miller was a commanding officer of a platoon in 1941 while they were stationed in Guadalcanal.

On December 4, 1942, the Raiders were met with strong enemy fire. While leading his platoon to safety and firing back at the enemy at the same time, Jack Miller was shot and badly wounded. His men had to carry him through the night to the base where he could receive immediate medical treatment. On their way down the mountain though, they suffered more enemy fire. Defending themselves once again caused significant travel delays. Lieutenant Miller passed away before the Raiders could reach the base. He was buried on the side of the trail.

In a later letter to his family, Lt. Colonel Carlson wrote, “Every officer and man of this outfit feels Jack’s loss. He was universally popular because of his quiet, friendly way with people and because of his able and efficient leadership…Please know that your son was both a man and a hero, and that he died for a cause in which he believed. We are all better Americans for having known him.”

Lt. Miller received a Navy Cross for his heroic actions. His citation reads: “For extraordinary heroism while attached to the Second Marine Raider Battalion in combat against enemy Japanese forces at Mambula, Guadalcanal, Solomon Islands, on December 3, 1942. As Commanding Officer of a platoon of Company A which had the point, First Lieutenant Miller daringly lead a flank attack on a strong enemy combat patrol engaged by his battalion at the summit of the hill. Realizing the advance of his platoon was being held up by hostile machine-gun fire, he dauntlessly led the assault on the Japanese gun position, sustaining wounds from which he died the following day. His great courage, outstanding leadership, and fearless devotion to duty were in keeping with the highest traditions of the United States Naval Service. He gallantly gave up his life in the defense of the country.” 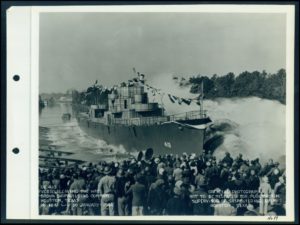 To honor his memory, legacy, and service, Miller’s family commissioned and dedicated a memorial at his alma mater. They dedicated it to Jack and all other alumni who lost their lives in the war. In 1944 a Navy destroyer was named USS Jack Miller in his honor. It received two battle stars during World War II, and was part of the Pacific Reserve Fleet until 1969.