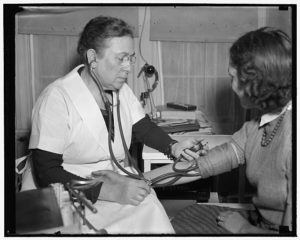 Born Katherine Breckenridge Bogel, Kate Karpeles was born into a medical family during October 1887 in Danville, Kentucky. Her father Dr. John Cowan Bogel was a medical surgeon, and influenced his daughter to pursue a medicinal career of her own. Kate earned her undergraduate degree from Goucher College in Baltimore, Maryland, and received her medical education and degree from John Hopkins University in 1914.

Despite her in-depth knowledge and qualifications, she found it difficult to find work as a woman. Eventually she obtained an internship with Garfield Memorial Hospital in Washington, D.C., and made history as the hospital’s first female intern. In 1916 she married fellow medical professional Dr. Simon Karpeles, son of Civil War Medal of Honor recipient Leopold Karpeles.

As Kate Karpeles’ career progressed, so too did her skills and technical achievements, and during WWI in 1918 she again made history in the Volunteer Medical Service Corps. After consistent advocacy from the Committee of Women Physicians, the U.S. military finally agreed to allow female civilian physicians to enlist as contracted army surgeons, so that male medical officers could deploy to the front lines. Karpeles was the first woman appointed as a female contracted surgeon with the Army, and earned the same pay and responsibilities that a male 2nd Lieutenant medical officer would have received.

Karpeles continued her professional relationship with the military once her contract ended in 1920. In 1932, she volunteered her medical services to Army veterans and their families. She also advocated strongly throughout her life for women’s equality in medicine. In the late 1930s, she was president of the American Medical Women’s Associations. Her primary achievements during that time include increasing the association’s membership, and fighting for appropriate pay and treatment for women physicians in the military, equal to that of their male counterparts.

Karpeles may not have been a service member herself, but her work and dedication to to the military helped form a more equal environment for female medical officers that would come after her. During her life she also strongly encouraged young women that it was possible to have a successful career and balanced family life without having to choose one or the other. In 1941 at 54-years-old, Kate Karpeles passed away. Today, she and her husband are buried at Arlington National Cemetery.