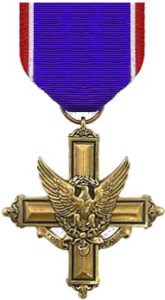 An example of what Captain Rubin’s Distinguished Service Cross looks like. (Source: Wikimedia)

Captain Kenneth E. Rubin was a helicopter pilot for the Army during the Vietnam War. In January 1968, the base he was stationed at came under attack by enemy Viet-Cong forces. Even though his team had just returned from completing 3 night missions, they all quickly got back into their helicopters to defend the base. Captain Rubin specifically put himself in danger by flying low and close to the enemy, directing their fire towards him as a distraction. This allowed other American forces to successfully attack the enemy. During this, Captain Rubin’s helicopter was hit. He found a different one, and again flew directly into danger to save two trapped and wounded Air Force guards. After the attack ended, Captain Rubin helped search the base to make sure it was safe again.

In September 1968, he received the Distinguished Service Cross for these acts of bravery and heroism. His citation reads:

“For extraordinary heroism in connection with military operations involving conflict with armed hostile force in the Republic of Vietnam: Captain Rubin distinguished himself by exceptionally valorous actions on 31 January 1968 as mission commander of a firefly-heavy fire team at Bien Hoa Air Force Base. As his team refueled in the early morning hours after their third mission, the base came under heavy rocket and mortar fire. Captain Rubin and his team immediately sought out the launching positions, directing devastating aerial rocket and machine gun fire into them. Returning to Bien Hoa after completing this and other engagement, they found the east end of the perimeter under intense automatic weapons attack. Captain Rubin exposed the enemy positions by flying low and attracting their fire, enabling his gunships to then rake the Viet Cong. His helicopter was hit; both the pilot and the gunner were wounded. He secured another ship, and next aided a ground unit, which had sent an urgent request for gunship support. This accomplished, his team continued the search for the enemy. Locating a force of nearly 200 Viet Cong, Captain Rubin directed his team in strikes on them, while he lay down a sheet of fire to keep the enemy from escaping. As daylight came, more hostile positions were discovered and silenced. Spotting two wounded Air Force guards caught between enemy forces, Captain Rubin directed his ships in an attack on the Viet Cong positions which annihilated them and permitted him to land and rescue the trapped men. He then coordinated with ground security forces as they swept the area and wiped out the remaining resistance. Captain Rubin’s extraordinary heroism and devotion to duty were in keeping with the highest traditions of the military unit and reflect great credit upon himself, his unit, and the United States Army.”