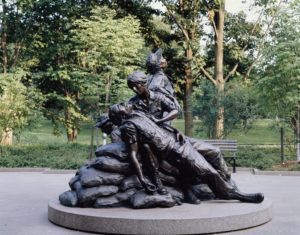 Marita Silverman was born in 1945 in Richmond, Virginia and grew up in Washington, D.C. She graduated from the University of Maryland with a nursing degree in 1966. She later joined the Army Nurse Corps, and in August 1970 she was sent to An Khe, Vietnam as a First Lieutenant. It is estimated that about 25,000 women served in the American military during the Vietnam War.

Lieutenant Silverman was an emergency room night supervisor for the Eight Field Hospital. The hospital was very small; it only had about 50 beds total. Her main responsibility was to care for patients until they were healthy enough to move to a larger hospital.

Only three months after she arrived, the Eight Field Hospital was shut down. The Army transferred Lieutenant Silverman to the 95th Field Hospital in Da Nang, about 7 hours north of where she was. There she took over the night shift at an Intensive Care Unit and Post Anesthesia Recovery Unit. Silverman remembers many Jewish staff and service members also being stationed at this hospital with her.

Even though her time at the Da Nang hospital was challenging, Silverman says she “wouldn’t change a minute of it.” In a 1971 letter she wrote to her alma mater, Silverman said,

“The hospital was busy…I worked in the ER – learned a lot and saw a lot…Every so often we would go on “Red Alert Status” – that meant incoming enemy fire – believe me that was hairy. We had to don helmets and protective jackets. [But] the hospital never took a direct hit during the time I was there.”

In 1971, Marita Silverman was promoted to Captain. Not long after she left the Army, and earned a Master’s degree in pediatric nursing from the University of Arizona. She and her husband still life there today. Whenever she travels east to Washington, D.C. though, Marita Silverman always makes sure she has time to visit the Vietnam Memorial as a tribute to her service.