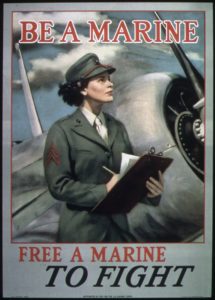 Miranda “Randy” Bloch grew up with a military presence; before moving to the United States, her father Isaac had served in Palestine as an aide to General John J. Pershing in WWI. It should have been no surprise that when the United States entered WWII, Miranda wanted to help.

Born in Jerusalem on June 26, 1922, her family moved to Philadelphia, Pennsylvania in 1924. The oldest of three daughters and only 19 at the time the United States entered the war, Miranda remembers her family not understanding her desire to enlist, and her father asking, ”What is a nice Jewish girl going to do in the military, especially in the Marine Corps?”

In September 1943, after Miranda turned 21 and no longer needed parental permission, she enlisted in the United States Marine Corps, and was sworn in by Major Ruth Cheney Street, the first commanding officer of the Women Marines Reserve, on the steps of the Library of Congress in Washington, D.C. During her basic training, Miranda Bloch exhibited strong mechanical skills, and was recruited with only 29 other women to be an airplane mechanic. This job expected her to be able to install, repair, and inspect aircraft radio gear, both on the ground and mid-flight.

Bloch was one of the few female Marines to be issued flight orders during WWII, and with that came the responsibility of drilling bombing techniques before take-off to combat zones, and wearing the standard military issued alpaca-lined flight jacket, Mae West vest, and a parachute in case the crew had to abandon the plane while in the air.

Bloch was discharged from the Marines in December 1945, and later served as the president for the Women Marines Association in the Greater Philadelphia chapter. She remains extremely proud of her patriotism, and her service time to her country.