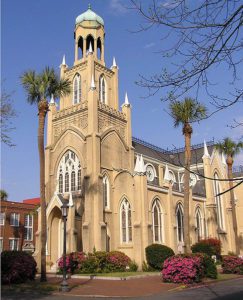 Mordecai Sheftall was part of the first generation of his family to be born in the American colonies. He was born on December 2, 1735 in Savannah, Georgia into an Orthodox Jewish family. His parents, Perla and Benjamin Sheftall, had moved to the new world from England and were actively involved in their colony. They helped found Congregation Mickve Israel, America’s 3rd oldest Jewish congregation.

Like his parents, Mordecai became very involved in colonial life and society. He was a successful merchant, shipper, soldier, and statesman. In 1768 he was chosen by the state to be Inspector of Tanned Leather for Savannah. This experience lead him to opening up his own leather facility with his brother. He later donated 1.5 acres of land to help establish Georgia’s first large enclosed Jewish cemetery.

When the colonies started fighting for independence, Mordecai Sheftall joined the cause. He represented the Continental troops in South Carolina and Georgia, and in 1777 he was commissioned as a Colonel by Major General Robert Howe. Mordecai Sheftall became the highest ranking Jewish officer on the American side of the Revolutionary War.

Revolutionary funds were difficult to come by at times though. Mordecai Sheftall used his own money to support troops, which helped provide ammunition, food, uniforms, and horses. In December 1778 though his luck ran out. He was taken prisoner by British troops. Despite begging the Continental Congress for a prisoner exchange, he received no help.

Upon his release he learned that the British had taken his land while he was a prisoner of war. He moved to Philadelphia with no money, and tried to start a new shipping business. When that failed, he returned to Georgia and was again hired by the state. In 1782, he moved back to Savannah. He joined Conregation Mickve Israel’s board of directors, and served a 5-year term as the congregation’s president.

Mordecai Sheftall remained actively involved in the community until his death on July 6, 1797. He was 61-years-old.