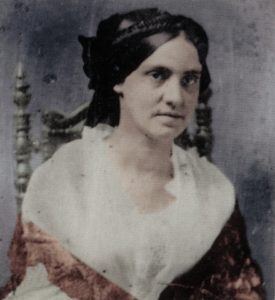 Phoebe Yates Levy Pember was born August 18, 1823 to a prominent and wealthy Jewish family in Charleston, South Carolina. She married a non-Jewish man, Thomas Pember in 1856; unfortunately the union did not last long, as Thomas Pember died in 1861 from tuberculosis.

At the start of the Civil War, Phoebe Levy Pember was childless, widowed, and unhappy. In 1862 she moved to Richmond, Virginia to serve as chief matron at Chimborazo Hospital, the largest Confederate hospital, and one of the largest military hospital in the world at the time.

In addition to administrative duties, Levy Pember was responsible for ensuring patients were taken care of, and would often serve as a final source of companionship for soldiers. One of her better-known accomplishments though was pushing for alcohol reform throughout the hospital in an effort to conserve supplies, as whiskey abuse was quite rampant. In her memoir, A Southern Woman’s Story: Life in Confederate Richmond, she recounts a time when she needed to pull out a gun for self-defense from a potential attacker. Luckily, she did not need to actually use it against the disgruntled patient. Despite many attempted setbacks she faced from her male coworkers, as nursing was a male-dominated field at the time, Levy Pember remained at Chimborazo Hospital until the South surrendered the war in 1865.

After the war, Levy Pember traveled throughout the United States and Europe until her death on March 4, 1913 when she was 90-years-old. She is remembered for the thousands of patients that she directly cared for during her time at the Chimborazo Hospital. In an era before it was common for women to work full-time, Phoebe Yates Levy Pember and her memoir help us understand what life was like for Southern Jewish women in the 19th century.