American Jewish Recipients of The Medal of Honor 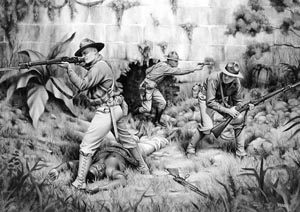 In company with members of the Fifth, Thirteenth, Twenty-third Companies and Marine and sailor detachments from the U.S.S. Connecticut, Gross participated in the attack on Fort Riviere, Haiti. Following a concentrated drive, several different detachments of Marines gradually closed in on the old French bastion fort in an effort to cut off all avenues of retreat for the Caco Bandits. Approaching a breach in the wall, which was the only entrance to the fort, Gross was the second man to pass through the breach in face of constant fire from the Caco Bandits and, thereafter, for a ten minute period, engaged the enemy in desperate hand-to-hand combat until the bastion was captured and the Caco resistance neutralized.