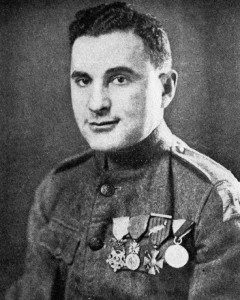 Battle or Place of Action: in Argonne Forest, France

He took out a patrol for the purpose of attacking an enemy machine-gun which had checked the advance of his company. Before reaching the gun he became separated from his patrol and a machine-gun bullet shattered his right arm. Without hesitation he advanced on the gun alone, throwing grenades with his left hand and charging with an empty pistol, taking one prisoner and scattering the crew, bringing the gun and prisoner back to the first-aid station.