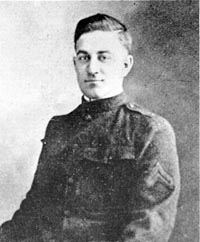 Battle or Place of Action: at Grand-Pre, France

Hearing a wounded man in a shell hole some distance away calling for water, Sgt. Sawelson, upon his own initiative, left shelter and crawled through heavy machinegun fire to where the man lay, giving him what water he had in his canteen. He then went back to his own shell hole, obtained more water, and was returning to the wounded man when he was killed by a machinegun bullet.