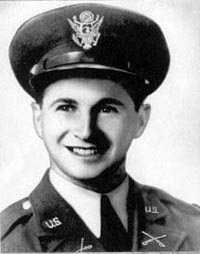 On 12 September 1944, 2d Lt. Zussman was in command of 2 tanks operating with an infantry company in the attack on enemy forces occupying the town of Noroy le Bourg, France. At 7 p.m., his command tank bogged down. Throughout the ensuing action, armed only with a carbine, he reconnoitered alone on foot far in advance of his remaining tank and the infantry. Returning only from time to time to designate targets, he directed the action of the tank and turned over to the infantry the numerous German soldiers he had caused to surrender. He located a road block and directed his tanks to destroy it. Fully exposed to fire from enemy positions only 50 yards distant, he stood by his tank directing its fire. Three Germans were killed and 8 surrendered. Again he walked before his tank, leading it against an enemy-held group of houses, machinegun and small arms fire kicking up dust at his feet. The tank fire broke the resistance and 20 enemy surrendered. Going forward again alone he passed an enemy-occupied house from which Germans fired on him and threw grenades in his path. After a brief fire fight, he signaled his tank to come up and fire on the house. Eleven German soldiers were killed and 15 surrendered. Going on alone, he disappeared around a street corner. The fire of his carbine could be heard and in a few minutes he reappeared driving 30 prisoners before him. Under 2d Lt. Zussman’s heroic and inspiring leadership, 18 enemy soldiers were killed and 92 captured.