A Purim in Tunisia 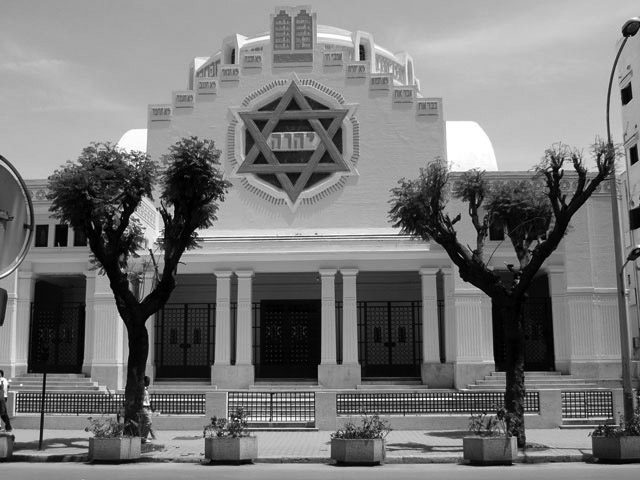 A.J. Callner was a cook for the U.S. Navy aboard USS LCI(L)-44 during World War II. In his memoir, he recalled having three different Purim meals in a single evening in local homes by the port at La Goulette, Tunis, Tunisia in 1944:

Early in March on one of our trips back to North Africa we were scheduled to dock in La Goulette, probably to bring back a ship load of infantry replacements. I checked my calendar and realized that we would be landing on the evening of Purim, the Jewish holiday of the Feast of Esther. I went up to the con and asked permission from [commissary officer] Mr. Hall to haul ass as soon as we docked, which would be somewhere around 1800 hours (6:00 PM). His response was that as long as the evening meal was covered I could take off as soon as the first line went over. The meal was ready and I was decked out in my cleanest set of whites and before we were fully docked I was off and away. Not only was I friendly with a couple of Jewish families in La Goulette, but because I was Jewish and wore it proudly, I was apparently known by more people than I realized.

At any rate I went directly to the Synagogue as I knew the reading of the “Story of Esther” would be taking place and it was. As soon as I entered the sanctuary, many looked around to see who would be coming in this late. The services came to a halt and did not resume until I had been draped with a talus (prayer shawl) and had a siddur (prayer book) in my hands. They knew it would be difficult for me to follow because I was brought up with the Ashkenaz or Eastern European dialect and they were praying in the Sephardic, or Spanish dialect. Every once in a while someone would make sure I knew where the place was and I just kept my mouth shut. It felt good to be there and I know they were happy to have me there.

After the services were over, I was approached by one of the store owners from town who I recognized and was invited to come and have dinner with them. There was no refusing and I was happy not to have to go back to the ship and eat leftovers since it was well past our dinner time aboard. “Oh yes, and please go back to your ship and bring your friends Ham and the Indian (Davis).” They apparently knew more about me than I gave them credit for. I thanked him and turned to leave when the Rabbi’s brother approached me. “Cookie, (thank goodness they didn’t know my real nickname), please give us the honor of having dinner with us on this festive occasion.”

“We know, but you will come to our house after you have left your first engagement. Oh, and by the way, bring your two friends.” I couldn’t believe that this was happening and as I stepped out of the synagogue walking on a cloud I was approached by Vincent, my best friend in La Goulette. “Adolph, my family and I were glad that you could join us for Purim (they all spoke English quite well) and we will expect you, Ham, and Davis to join us for dinner.”

“But Vincent I’ve just accepted two other invitations for dinner for myself and my two friends.”

This wasn’t happening, but it did. I went back, got Ham and Davis, got them dressed in their whites, and off we went to our first, second, and third dinners on Purim 1944. At the first dinner we found the family waiting for us and after the blessing before dinner we sat down to a meal of chicken soup with cous-cous, salad, roast chicken, potatoes, and an assortment of other vegetables, followed by cake and coffee.

All through the dinner the wine flowed freely. We brought nothing with us.  I knew better. I had tried it before and was refused the offer. First of all, these people were very orthodox and any food from our ship would not be kosher. Secondly, this group of people was so grateful to be liberated from the Nazis that they wanted to show their gratitude in the only way they could, by being hospitable.

The first family knew we had two more dinners to go to so as soon as dinner was over, they hustled us out. The second dinner was at the home of the Rabbi’s brother, and it was a duplication of the first in every detail. By now we knew we had to pace ourselves so we ate lightly, and I drank lightly also. Ham and Davis could pack away a lot more wine that I could, and they did. By the time we arrived at the home of Vincent and his family, Ham and Davis were feeling no pain.

Vincent and his family were special people to me, and I know the feeling was mutual. After all, it was 2230 hours (10:30 PM) before we arrived there, and again the meal started off with chicken soup and in every other respect it was a duplication of the previous two.

After our third meal, there was no hurry to return to the ship, and we sat around their large dining table, eating sweets and drinking more wine ‘til the wee hours. Everyone was in a gay mood and why not? My two shipmates because of this windfall of three festive meals and all the wine they could consume; myself because it was as close to being home for Purim as one could imagine and being with a family that clearly had adopted me. For the families, in remembrance of the meaning of Purim. After all, was not the “Feast of Esther” the story of the deliverance of the peoples of Israel from the scheming of a tyrant? And weren’t they really celebrating the deliverance from the latter day tyrant, Hitler? And what better way to do it than to entertain a few of their “liberators”, especially when one of them could be a fellow Jew.

It was important to Callner that the benefits of Jewish community were mutual. As much as he enjoyed the benefits of the food, drink and companionship, the fact that he was helping the Tunisian Jews to celebrate their liberation was perhaps most important.

A.J. Callner’s memoir is in the archives of the National Museum of American Jewish Military History.