Hall of Heroes: American Jewish Recipients of the Medal of Honor 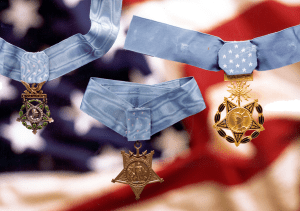 This exhibit pays homage to the Jewish-American servicemen who have received the Medal of Honor. The Medal of Honor is America’s highest award for military valor, presented to those who have performed an act of such conspicuous gallantry as to rise “above and beyond the call of duty.” The recipients of this distinction include only some 3,400 of the tens of millions who have served their country since the Civil War. The recipients list includes soldiers, sailors, marines, and airmen, officers and enlisted. Amongst these heroes are eighteen men of the Jewish faith. Their stories are among the many examples if bravery and gallantry shown by Jews in the United States armed forces.

The Medal of Honor stands for the highest degree of heroism; its recipients risked their lives from freedom, liberty, and the lives of their fellow soldiers. The National Museum of American Jewish Military History is honored to tell the stories of the men of the Jewish faith who have received the Medal for their bravery and courage.