Over There: Arthur Hays Klein

At age 19 in 1908, Arthur Klein was racing cars in Detroit. Klein was born in Cleveland in 1889, the son of immigrants from Austria-Hungary. He’d sold cigars, opened a garage and worked designing power plants for automobiles to get out of the racing life. But the races always drew him back. He became well known in racing circles and competed across the country. When war broke out, Klein was living in Youngstown. Ohio. He was commissioned in the Army. 2nd Lieutenant Klein was assigned to the Air Service and sent to Call Field, Texas. Before long, he was shipped overseas to France. 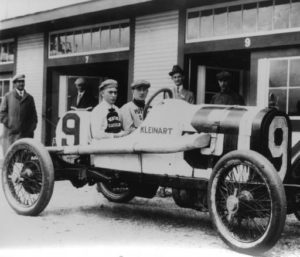 Klein became a Chief Aeronautical Engineering Officer at the 3rd Aviation Instruction Center (3AIC) at Issoudun, France. American pilots were trained at Issoudun. At the time, it was the world’s largest air base. Students rotated through the fields at 3AIC to learn multiple aspects of aviation before being sent to combat situations. At the base, Klein reported to Lieutenant Colonel Hiram Bingham. Bingham was already world famous as an explorer. He was best known as “the discover of Machu Picchu.” Bingham recommended Klein for promotion on November 8th, 1918, shortly before the war’s end.

At Issodoun, Klein was in charge of Field #10 and the fleet of DH-4 Liberty Planes. The DH-4s were the only American-made plane in the war. They were used for observation and light bombing. Klein was responsible for maintaining the aircraft used for observation pilot training. In his book, An Explorer in the Air Service, Bingham described the DH-4 program as a mistake. Bringing the planes from the U.S. was expensive and their complicated controls at the hands of inexperienced pilots resulted in a high mortality rate. He described the enormous difficulties of controlling the planes at a wet French aerodrome. This made Klein’s work even more important. The DH-4’s mechanical quirks would have kept the engineers in France quite busy. 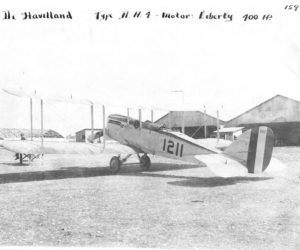 Klein spent eight months in France. He was discharged on February 23, 1919. He returned to the civilian life in time to begin preparing to race in the Indianapolis 500. In an article about his return from war to racing, an Indianapolis Star article described him as disappointed in missing out on combat. It described him as a “full fledged aviator… deprived of his chance of fighting only because of the armistice.” The Motor Age declared: “Airplane tactics in track racing will receive exposition at the hands of Lieut. Arthur Klein, the first American Army officer and aviator to enter that event.” Klein drove a Peugeot built in Alsace-Lorraine before the war. It was his first time at Indy since 1915. He would complete 70 laps when an oil line problem ended his race leading to a 19th-place finish in his post-war return.

Klein would continue racing for several more years. Later, he moved to Hollywood where he ran a garage and eventually became head of transportation for Warner Brothers Pictures. He married actress Peggy Pearce. Klein died in Los Angeles in 1955.