Over There: Sam Raiz

Only God Knows Their Names 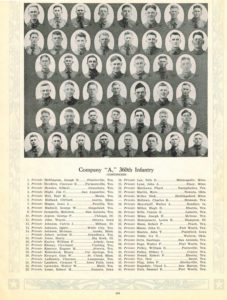 Heavy rains and strong winds whipped across the American trenches lining a hill near the French town of Saint-Mihiel on a mid-September morning in 1918.  Sam Raiz fixed his bayonet to his rifle. Along with other members of A Company of the 360th Regiment of the 90th Division Texas Brigade, he began a march towards the heavily fortified German lines. The men trampled over barbed wire and sauntered through thick mud, moving forward, ever forward down a hillside.

Born in Vilna, Lithuania, a part of the Russian Empire, he immigrated to the United States in 1907 and moved in with his aunt and uncle in Fort Worth, Texas. When inducted into the Armed Forces, he resided in Wichita Falls, Texas, where he managed an office of the Missouri Iron and Metal Industries owned by his uncle’s relatives.

In the fall of 1917 President Woodrow Wilson requested additional divisions for the fight in Europe.  Therefore, the Army formed the 360th Regiment of the 90th Division. As almost all the soldiers were from either Texas or Oklahoma, a brigade from each state was developed. Initial training took place at Camp Travis in San Antonio in sight of historic Fort Sam Houston, and the soldiers arrived in France for additional training in June 1918.

The Germans captured the area around Saint-Mihiel in 1914 and still held a significant amount of territory in the area that interfered with communication and supply. Sam and the other soldiers in Company A entered into some of the heaviest fighting of the entire offensive. So strong was the wilting artillery and machine gun fire whistling over their heads, that the unit was forced to dig in where they stood and halt for a while. However, under the leadership of noncommissioned officers they reorganized and attacked with drawn bayonets on the following day.

Just a few days before fighting at Saint-Mihiel, the Army granted Jewish soldiers passes to attend Rosh Hashanah (Jewish New Year) services for two days beginning on September 6, 1918.* Usually services were held in towns or cities where temples or Jewish populations already existed.  In addition, the American command stated, “If military necessity prevents granting passes on these days mentioned, provisions should be made to hold divine services wherever possible.”

Men such as Sam often walked more than ten miles though terrible weather, mud, and treacherous terrain near enemy positions to attend nearby services or seek transportation to where Jewish chaplains were available. How powerful for him to hear: “Who shall live and who shall die. Who by sword and who by fire…” just days before a major battle.

On September 19, Sam’s ears clamored and his body shook from the intense bombardment of regular and gas shells.  The men of A Company continued to advance and forged over a small tributary of the Moselle River. The powerful bombardment lit the surrounding grass into a blazing inferno. And then it happened. One high explosive shell from the German side landed in the midst of Sam’s A Company and wiped out an entire work combat group. Sam heard nothing further, saw no more fire and felt no more rain. Along with other comrades, he passed on, his remains unrecoverable. He had been an American citizen for eleven years and died fighting for his country.

A telegram on Sept. 20, 1918, notified his uncle and aunt, Morris and Molly Ginsburg of Fort Worth, that he was killed in action. The Army recorded his name on the Tablet of the Missing, Saint-Mihiel American Cemetery and Memorial, Loraine, France.**

*Jewish soldiers were also given passes when possible for Yom Kippur (Day of Repentance) on September 15-17.

**While visiting several veterans’ cemeteries in France four years ago, I came upon a number of grave-sites of soldiers whose remains were so badly obliterated that they could not be identified when buried.  The markers read:  “Here Rests In Honored Glory A Comrade In Arms Known But To God.”

A version of this article will appear in Dr. Julian Haber’s upcoming book The Yanks Are Coming, Over There, Over There.