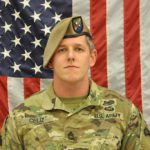 Sergeant First Class Christopher A. Celiz distinguished himself by conspicuous gallantry above and beyond the call of duty while engaged with the enemy in Paktia Province, Afghanistan, on July 12th, 2018.

As the leader of a special purpose unit composed of partnered forces and members of the 1st Battalion, 75th Ranger Regiment, Sergeant First Class Celiz led an operation to clear an area of enemy forces and thereby disrupt future attacks against the government of Afghanistan and allied forces.

Shortly after his team reached their final objectives, a large enemy force attacked, placed effective fire on him and his team, preventing them from maneuvering to counterattack. Realizing the danger the attack posed to his team and the operation, Sergeant First Class Celiz voluntarily exposed himself to intense enemy machine-gun and small-arms fire to retrieve and employ a heavy weapon system, thereby allowing U.S. and partnered forces to regain the initiative, maneuver to a secure location, and begin treatment of a critically wounded partnered force member.

Throughout the entire engagement, Sergeant First Class Celiz significantly changed the course of battle by repeatedly placing himself in extreme danger to protect his team, defeat the enemy, and it ultimately cost him his life. Sergeant First Class Celiz’s extraordinary heroism and selflessness above and beyond the call of duty were in keeping with the highest traditions of military service and reflect great credit upon himself, his unit, and the United States Army.