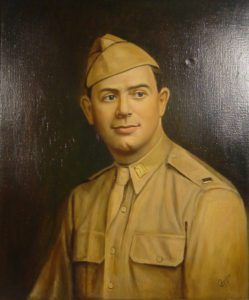 Alexander Goode was born in Brooklyn, NY on May 10, 1911 and raised in Washington, D.C. He attended the University of Cincinnati and was ordained as a rabbi from Hebrew Union College in 1937.

After a failed attempt to join the Navy, Goode was accepted into the Army in 1941 and studied with the chaplain’s school in preparation for a European deployment. In 1942, he and 3 other military chaplains, 2 Protestant pastors and 1 Catholic priest, embarked on the USS Dorchester, sailing from New York City to Greenland.

On the night of February 3, 1942, the Dorchester was hit by a German submarine torpedo. The four chaplains responded immediately, and began calming men onboard and distributing life jackets. When they ran out of life jackets to hand out, the chaplains gave up their own to waiting soldiers, regardless of their faith or race. About 18 minutes after the ship was struck by the torpedo, it sank into the Atlantic Ocean. The four chaplains were last seen standing arm-in-arm, praying as the ship went down. While there were 700 casualties aboard, including the chaplains, over 230 were saved, in no small part due to their quick response. 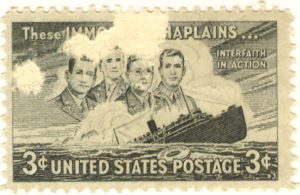 Lieutenant Goode and the other 3 chaplains were posthumously awarded the Distinguished Service Cross and Purple Heart for their courageous sacrifices. In February 1951, President Truman dedicated a chapel in their honor in Philadelphia. February 3 is affectionately known as “Four Chaplains Day” in many military and civilian communities.

To learn more about the Four Chaplains, visit www.fourchaplains.org.