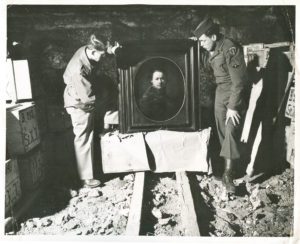 Born on January 28, 1926 in Germany, Harry Ettlinger immigrated to the United States in 1938 with his family. They left the day after he became a Bar Mitzvah to avoid rising Nazi persecution. The Ettlinger family settled in Newark, New Jersey where Harry graduated from high school, and was drafted into the army. He originally deployed to his home country of Germany as an infantryman, but once his superiors learned he spoke German fluently, he was selected as a translator for upcoming Nuremberg Trials. After months of waiting for an assignment, Ettlinger finally volunteered for the “Monument, Fine Arts, and Archives” division of the Army; a group of about 345 service members from 13 different countries tasked with recovering looted art, commonly known as “The Monuments Men.”

Within the MFAA, Ettlinger was tasked with translating Nazi documents, and helping interpret Nazi interrogations. He traveled to Hitler’s private and abandoned home in Southeast Germany; Neuschwanstein Castle in the Alps; and salt mines beneath German mountains to help secure, excavate, and return looted artwork across Europe. In total the MFAA found over five million missing important cultural items, including paintings, sculptures, jewels documents, and human remains. 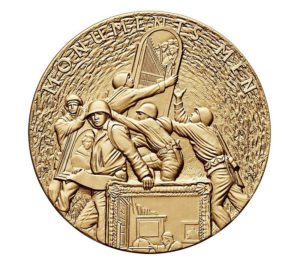 One of Ettlinger’s more meaningful discoveries was a Rembrandt self-portrait, from 1645, which he helped make just prior to his 21st birthday. Before fleeing Germany, his grandfather Otto Oppenheimer had been a devout art lover and collector. He owned a print of the Rembrandt self-portrait which hung in his home, and Harry often admired as a child. At the time Jews were not allowed to enter public museums in Germany, so he could never view the original painting in the Staatliche Kunsthalle Kunsthalle, a state art museum only a few blocks away from his home. This painting was in one of the first crates that Ettlinger and the Monuments Men opened in the salt mines, and he later personally returned it to the museum. Today, Ettlinger has his own copy of the painting hanging in his home. In 2014 he told the UK magazine Mirror, “It reminds me of what we achieved and the sacrifices that people like my buddies made.”

After the war, Sergeant Ettlinger took advantage of the G.I. bill and pursued a Master’s degree in mechanical engineering and business administration. He retired in 1992, and actively advocates for Holocaust education and remembrance. In 2014, President George W. Bush presented Harry Ettlinger and other members of the Monument, Fine Arts and Archives division with a Congressional Gold Medal. Ettlinger currently resides in New Jersey, and is one of the last living Monuments Men.

While the Monuments, Fine Art and Archives division was able to restitute millions of objects, thousands are still missing. To learn more about their history, legacy, and ongoing mission, visit www.monumentsmenfoundation.org.